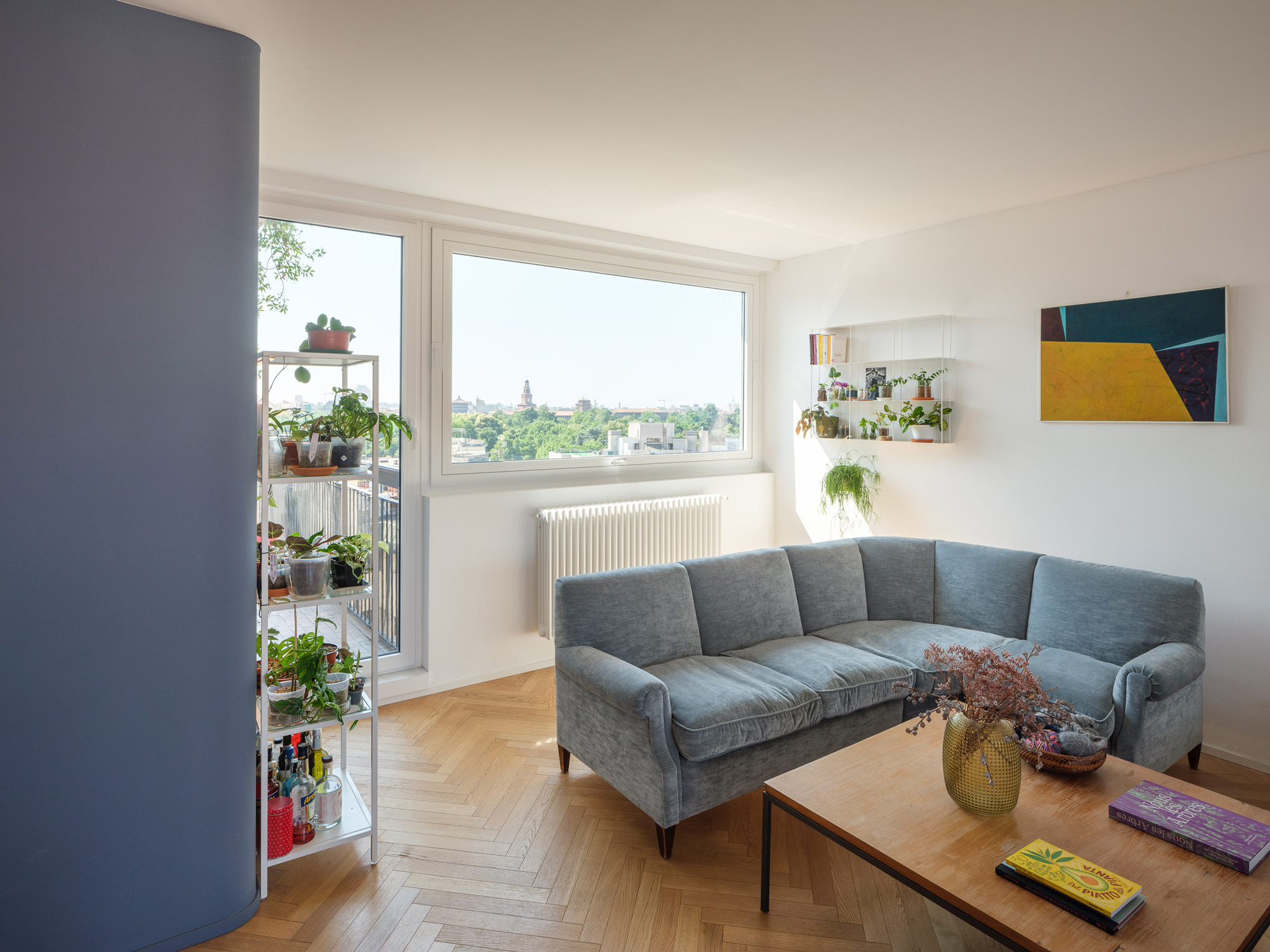 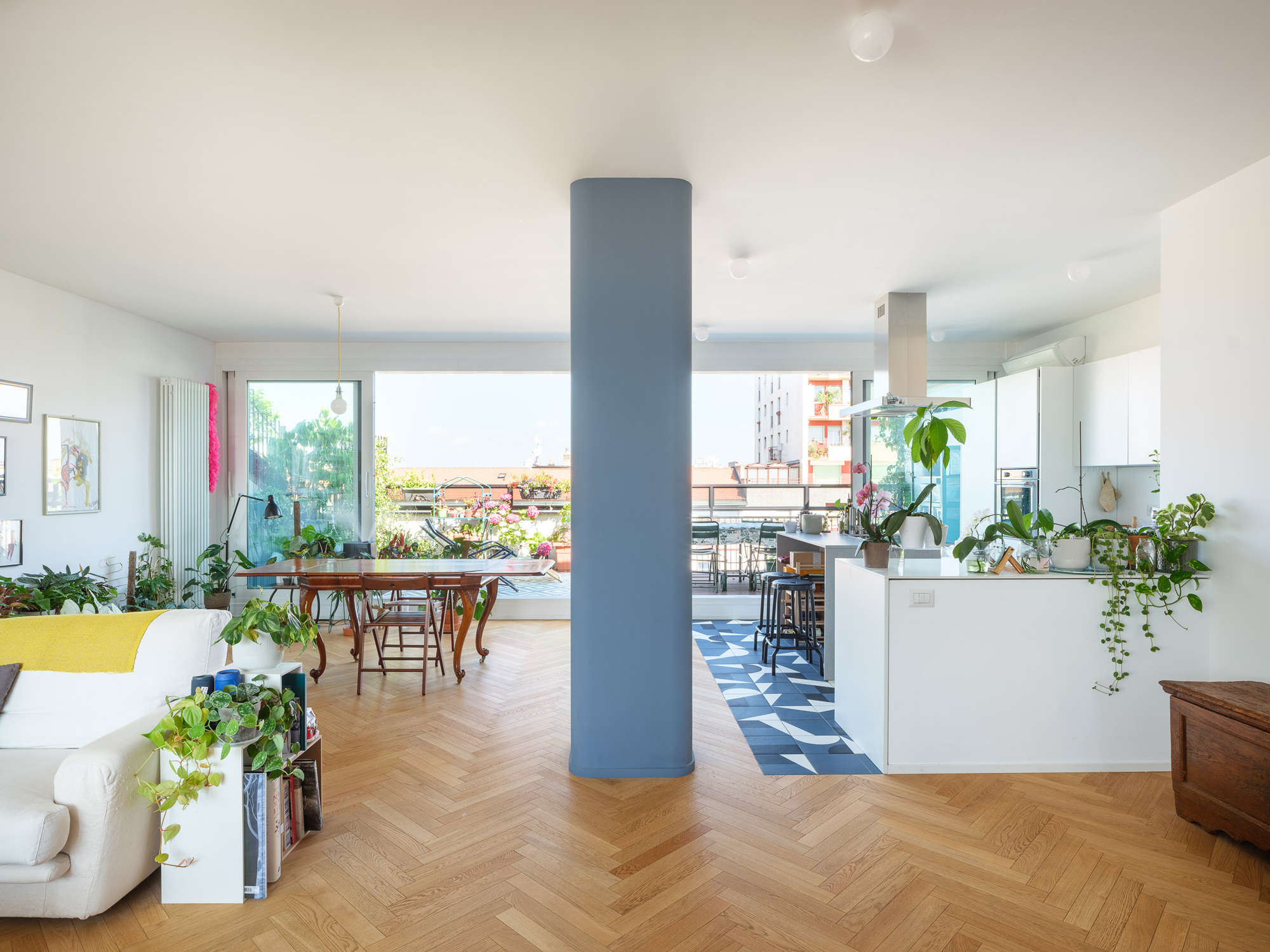 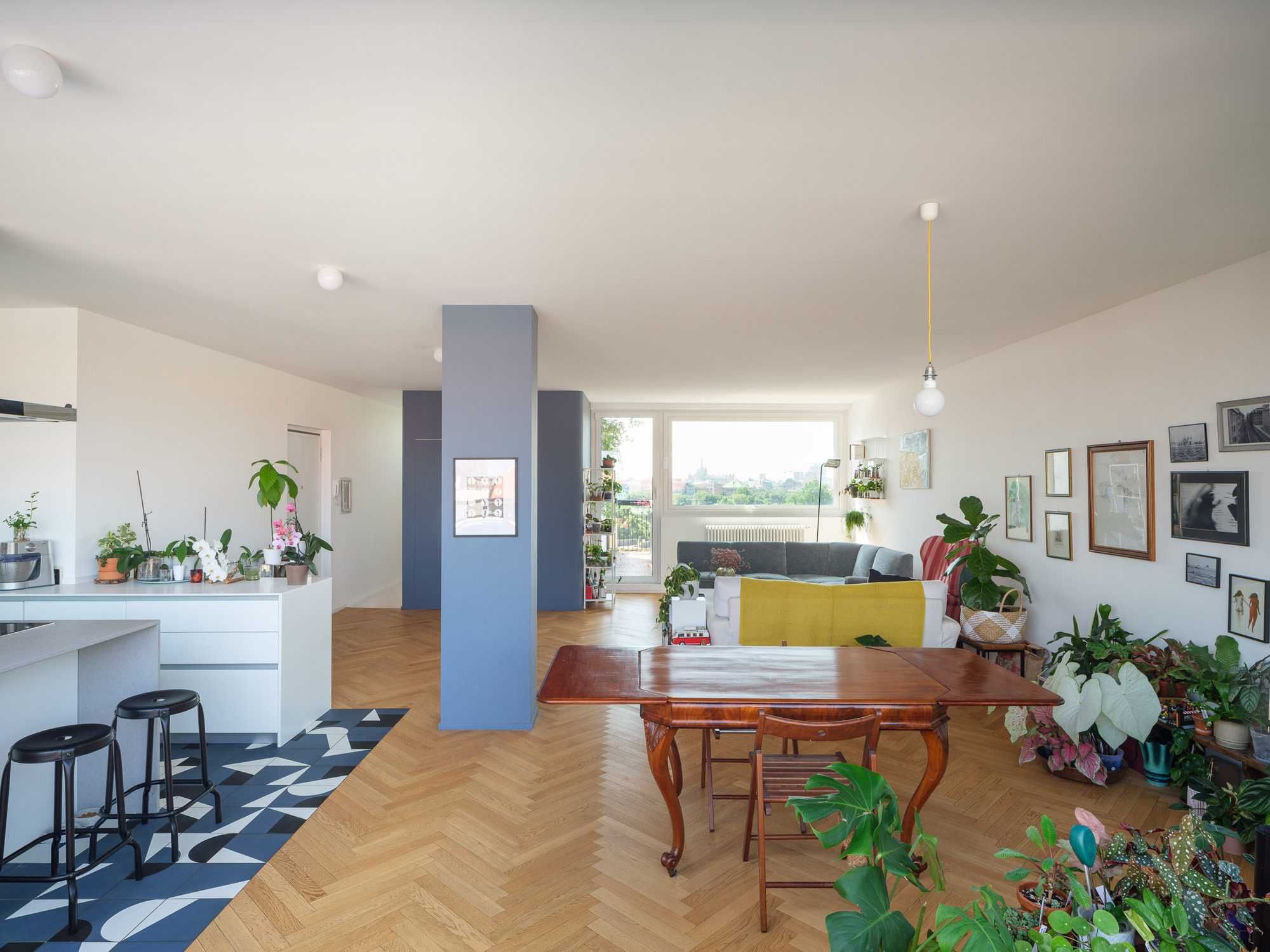 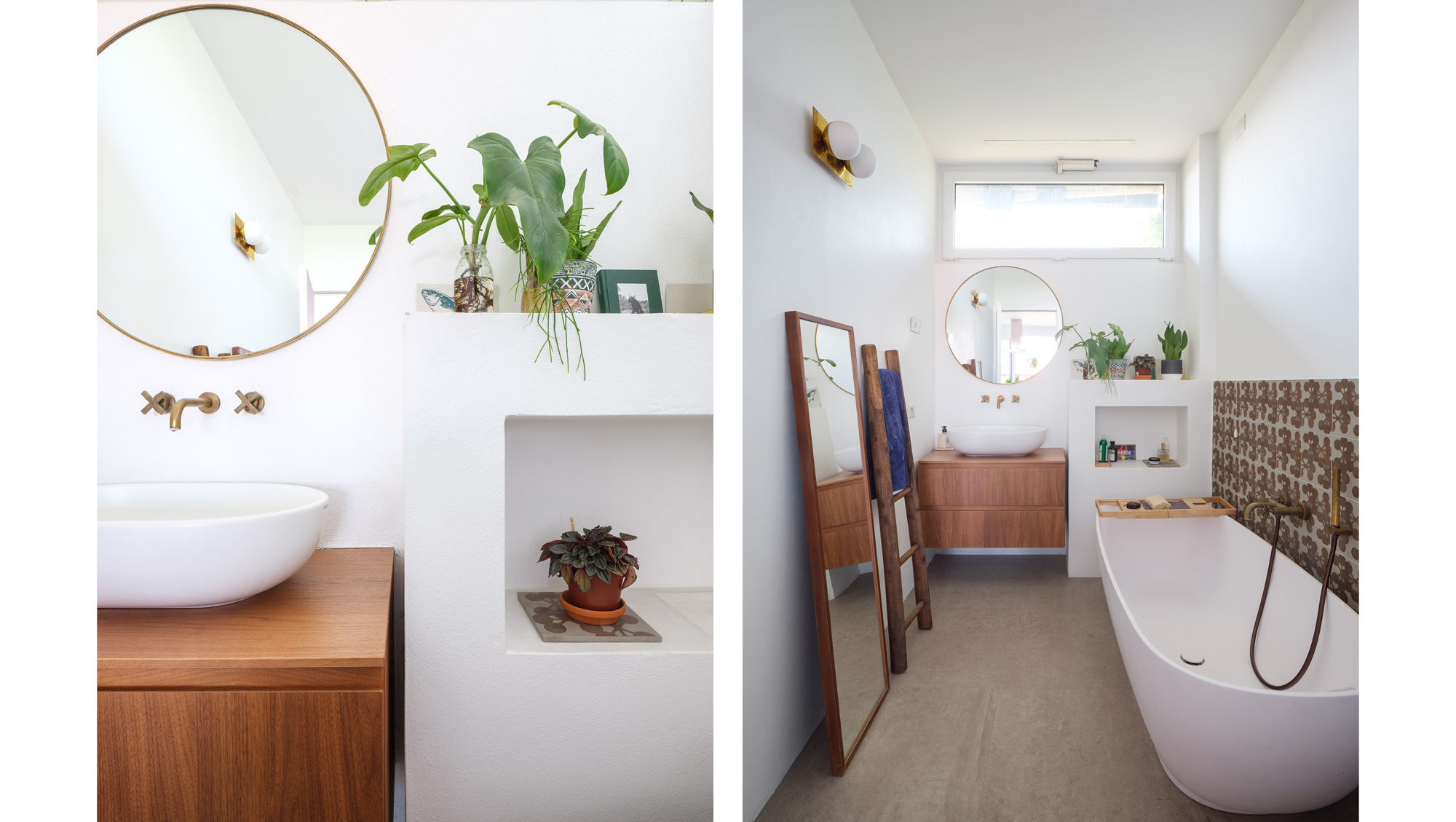 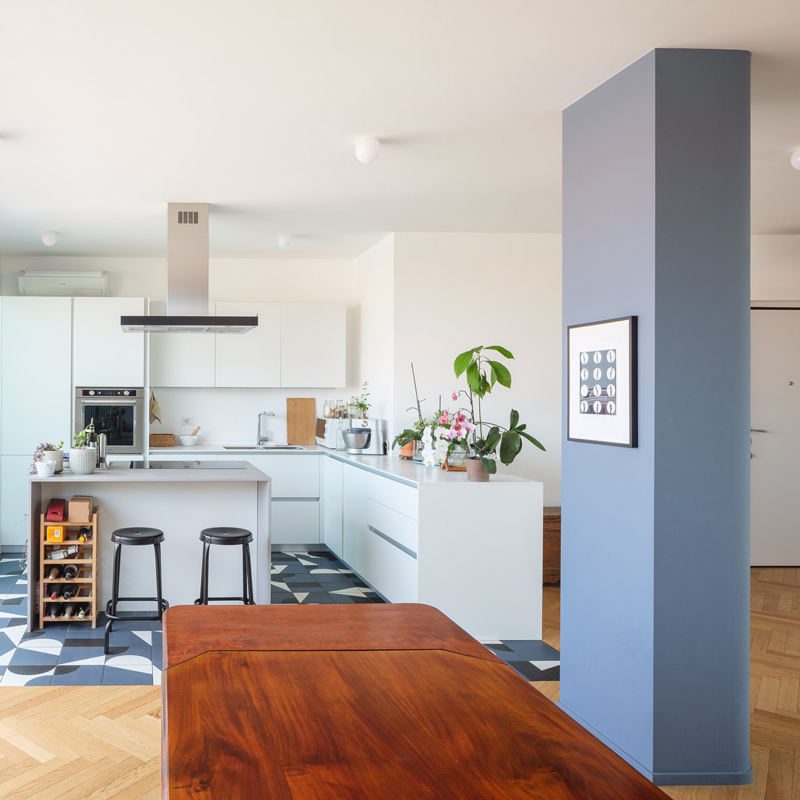 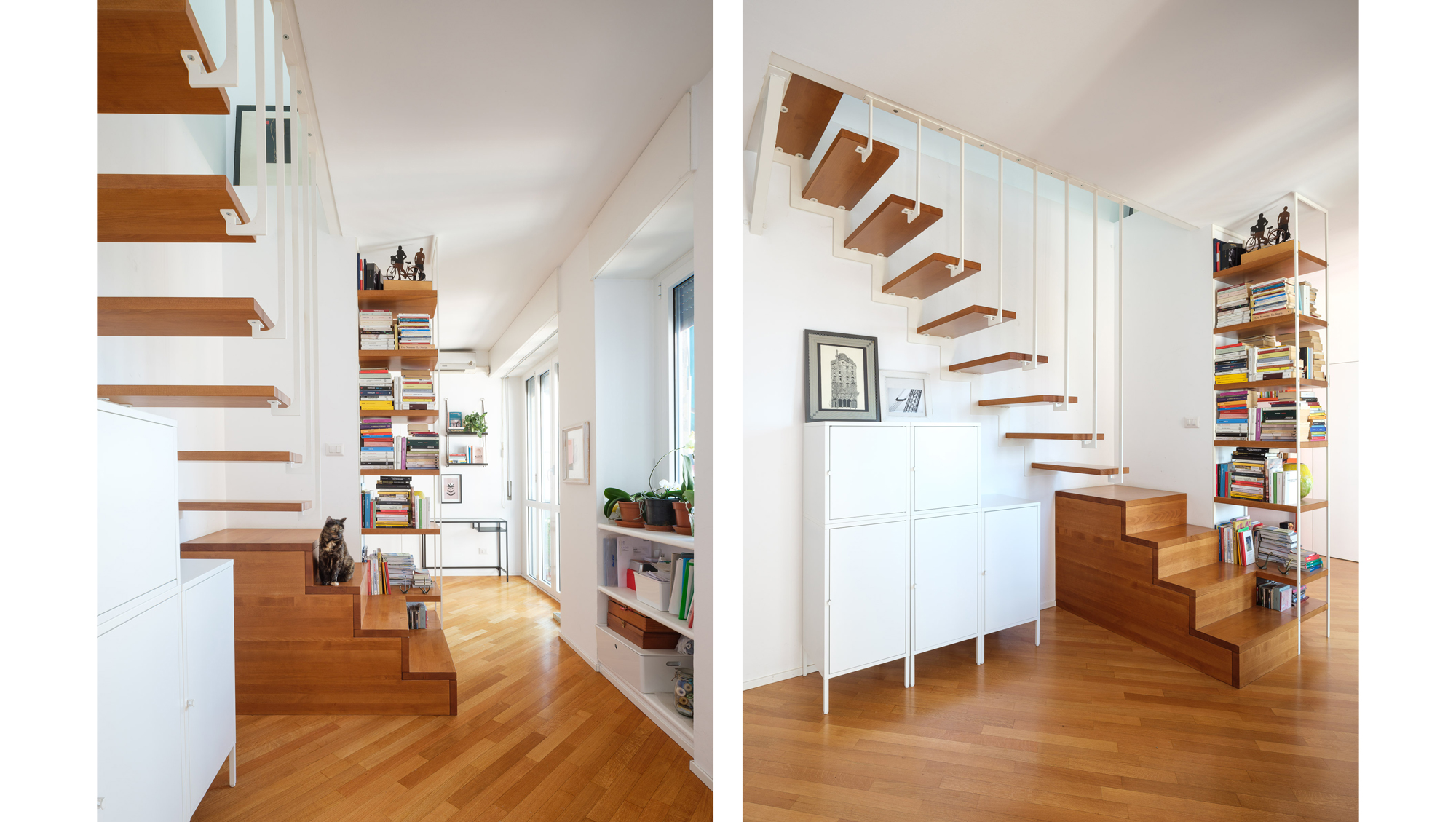 A 120 sqm duplex overlooking Arena Civica and main historical and contemporary landmarks in the city. This was the object of the renovation project realized by AOUMM in Milan, in the area around Arco della Pace.

The intervention aimed to join in a unique apartment two units placed on the eighth and ninth – and top – floor of a building from the 70s. The placement on two levels was the starting point for the arrangement of the spaces: on the ninth floor, the brightest, is located the open living area while the sleeping area is on the lower level.

The living space on the ninth floor is a wide 60 sqm open space with double exposures. At the northwest, the space opens on a terrace facing CityLife skyscrapers, in spatial and visual continuity with the interior thanks to a large sliding window frame taking up the whole partition wall. At southeast, the apartment looks toward the Duomo, the Torre Velasca, the Castello Sforzesco with its Torre del Filarete. This unique view is enhanced by a wide window with unique glass, framing the city skyline. Besides, a glass door gives access to a balcony, which is overlooking the Arena Civica and is separated from neighboring spaces by a wall of vegetation.

The living room is characterized by an Italian-laid herringbone natural oak hardwood floor and walls painted in powder blue; the color highlights key elements in the spatial layout – as the structural pillar in the center of the room and the masonry box enclosing the bathroom –, returning in the colors of the open kitchen floor. The kitchen, located next to the terrace, is organized in an L shape around a central island aligned with the pillar. This arrangement suggests a functional definition of the living area and dining area, maintaining the unity of the environment.

On the lower floor, a fluid environment accommodates the master bedroom, a walk-in closet half-hidden by the wall at the head of the bed, a study area, and a second bathroom, where the powder blue appears again in the embossed geometric patterns of the tiles.

The distributive element of the space is the staircase connecting the two levels, obtained at the upper level between the volume of the bathroom and the perimeter wall. The staircase is a functional and décor device at the same time, introducing in the space a work of contrasts between masses and lightness. In the first span, the wooden steps are supported by thin steel cables hanging on the slab, emptying the rise of the steps. The last four steps are incorporated in an autonomous, massive wooden volume, placed on the floor. A double-sided bookshelf is integrated into the staircase block and welds it in spatial terms to the wall structure, screening the bathroom door from the view of those on the stair.